The Origins Of Shooty Fruity

Sometimes creative concepts have an unlikely origin and Shooty Fruity, our irreverent, multi-tasking fruit shooter, is one such example.

Rewinding back to Autumn 2016, nDreams had had a productive and successful year - we’d released The Assembly and had completed development of Danger Goat as part of the launch lineup for Google’s Daydream. Internally we were asking ourselves the question, “what makes a great VR game – what are the tent-pole VR mechanics around which a great VR gaming experience is built"?

We had several prototypes in development and one of them, with the working title of War Room, placed you in the position of a general overseeing a battlefield – a bit like Brass Tactics – with one key difference. In War Room, you were physically present  in a command vehicle on the battlefield and you controlled the action via an AR map table. This enabled us to place you in the heart of the action with your command vehicle coming under attack – providing great opportunities to give highly visceral feedback such as impacts and views out of the command vehicle of the unfolding action outside. Another cool thing the prototype demonstrated was what could happen if your command vehicle became overwhelmed on the battlefield and, rather like the opening of the original Star Wars, enemy troops breached the vehicle and stormed the command room.

In the prototype we had simple capsules to represent the enemy waves as they breached your command vehicle and tried to outflank and shoot you. Armed with only a gun, you tried to take them out... We also provided you with a cigar, for no other reason that you were in the role of a General on the battlefield and, hey, Generals smoke cigars, right? Once we’d played the prototype, we were struck by two things - firstly the sense of agency the player had and how the simple addition of the cigar amplified the sense of Roleplay; you felt really badass!

We created a top-line concept based on these ideas for something we called Capsule Crusaders. We really wanted to create something over the top, irreverent and above all, fun to play. The high concept had a number of key images – one of Arnie smoking a Cigar (been pushing pens too long?), one of Al Pacino in Scarface shooting from the balcony (say hello to my liddle friend) and finally, there was an image of a big blingy gold pistol.** 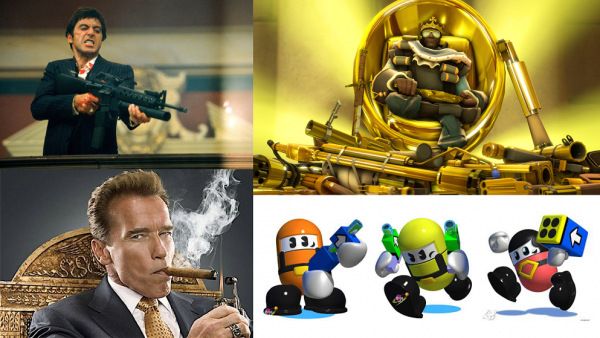 A few days later there was already a rough playable prototype - how would you like to be Che Guava and shoot fruit (tongue firmly in cheek)?. Whilst slightly ridiculous, it had the player doing a mundane task at the same time as shooting enemies (in this case scanning shopping!)... 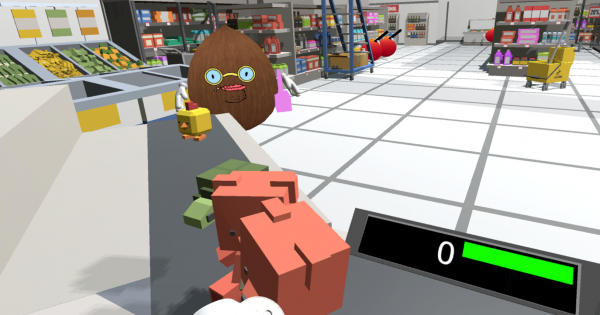 and players were relaxing in a virtual hot tub as a South American dictator, cigar in hand taking pot shots at virtual fruit marauders. It was a great prototype, both reinforcing that there was something in the irreverence of the idea and that, maybe surprisingly, shooting fruit was pretty satisfying! 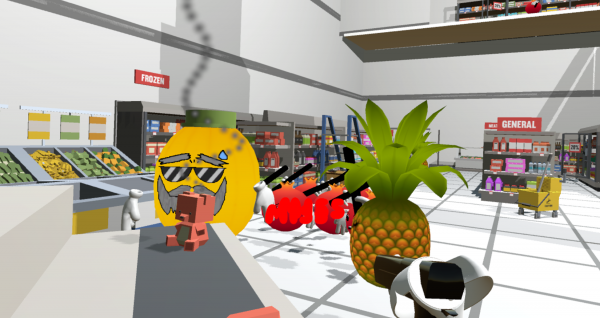 The new concept, however, required a linear narrative and was very dependent on having numerous unique levels. We felt that having something with a much more replayable mechanic at its heart, building on the idea of multitasking from the previous prototype could work really well.

We’d been working with Near Light in Brighton on Perfect and we met for an informal Christmas lunch to celebrate the end of a productive year. We started to chat about this concept that we’d been brewing back at nDreams HQ and described the fun of both the prototypes but explained that something was missing. 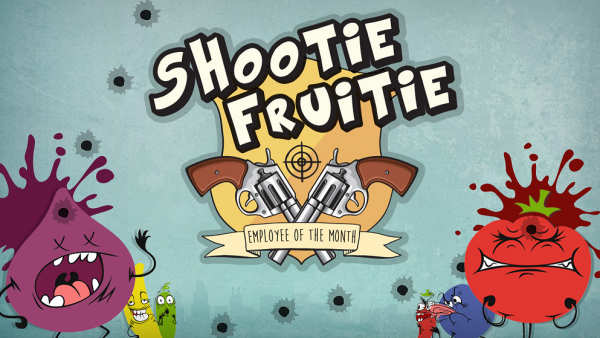 The game needed more than just the shooting, it needed to be something fun to play again and again. Lots of fruit-based puns and mince pies later and we’d started to riff on the idea of a supermarket and doing the various jobs there whilst shooting fruit. The missing element turned out to be Super Mega Mart and your role as aspiring store assistant come shooter of fruit... and so Shooty Fruity was born.

Tom Gillo is VP of Development here at nDreams.  Ahead of working here, Tom was Game Director at Sony London, leading development on innovative titles such as Eye Toy, Eye Pet, Wonderbook, and PlayStation VR Worlds.  You can follow Tom on Twitter @Tomas_Gillo

For more on Shooty Fruity, including on our new arcade version, visit the game page.  We’re currently working on our biggest VR project ever – for the latest news keep in touch via @nDreamsVR.

We've charged full speed in to the new year here at nDreams and whilst we were off enjoying an admittedly very strange Christmas break, CEO Patrick was reflecting on what 2020 brought to the world and...

We are excited to announce that our critically acclaimed multi-tasking shooter, Shooty Fruity, will be coming to the Oculus Quest platform!

Become a grocery store Rambo at your local VR arcade from today!

Because revealing just the one isn't enough... Shooty Fruity Arcade and Perfect Balloon Flight both coming soon to VR arcades!