We spoke to Purple Yonder Co-Founder, Kelly Howard, about the story behind Little Cities and how the indie team behind it are delivering a wholesome and intuitive city creator in VR.

After working at a AAA studio, back in the late 2000s, James [Purple Yonder Co-Founder and my husband] started to get involved in the indie scene. He preferred the creative freedom and hands-on approach that comes with working with a smaller team. He found himself following his passions, branching out into new fields of tech, and experimenting in the world of virtual reality development.

One of these side projects would eventually become Little Cities. James needed help with the management side of things, so we decided to join forces to develop this early concept into a full game. We’ve been fortunate enough to be supported by a small team of talented industry veterans who are just as passionate as we are about delivering fun and memorable games. It has been such an incredible process to see our little city grow as we tended it with care.

Setting Up the Studio:

Once we had the initial concept of what Little Cities would be, we wanted to be able to develop it to its full potential. We pitched to the UK Games Fund and were awarded a government grant! That was a real turning point for us and the official start of our Purple Yonder journey.

With our hearts completely set on delivering Little Cities to its full potential, we reached out to nDreams. It has been fantastic to work alongside them as they’re closely aligned with our vision for the game. 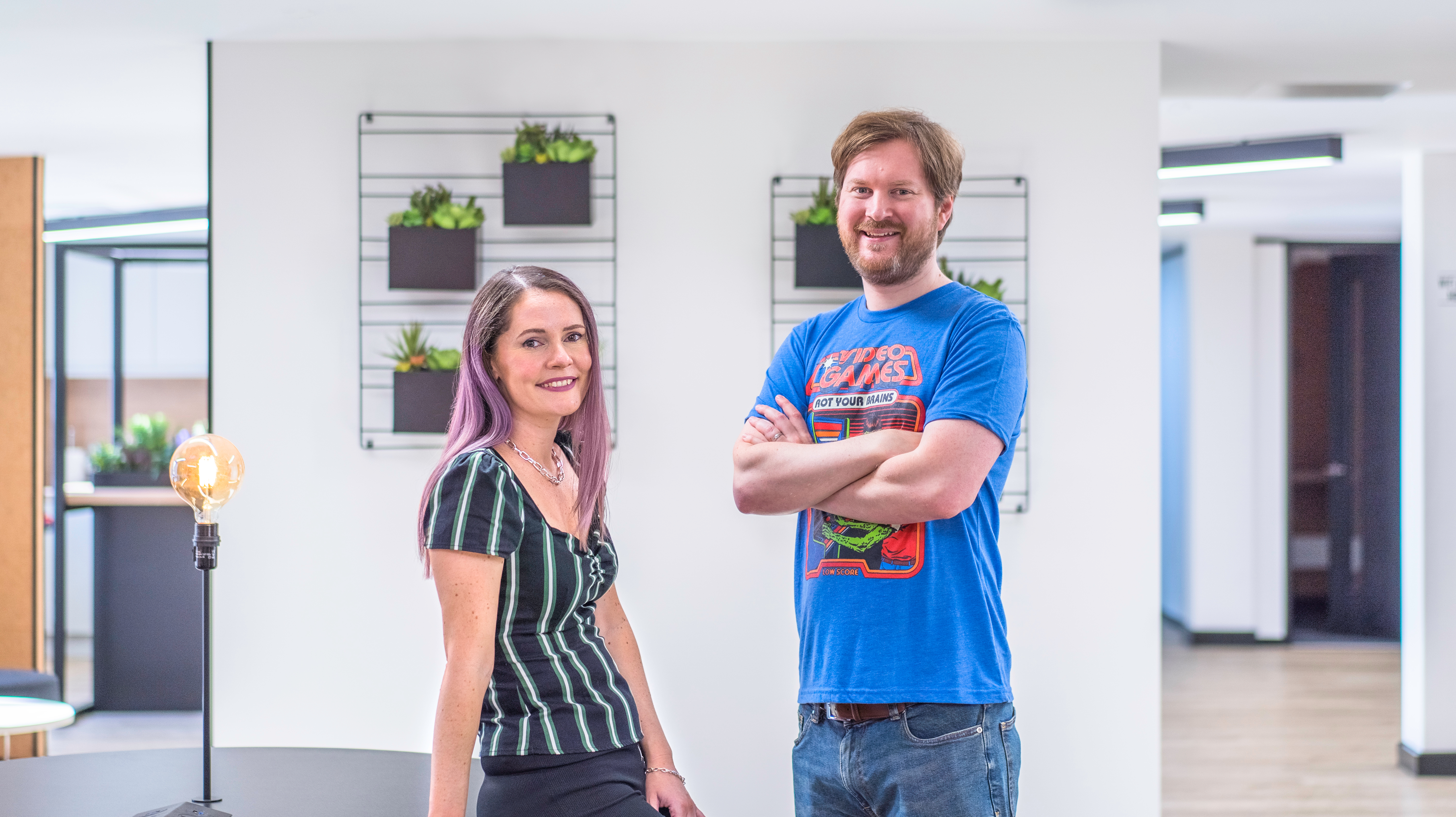 Bringing the Genre to VR:

There are so many sub-genres of video games to explore in VR which are yet to be fully realised. Little Cities is our labour of love and ode to the established city creation games. We’re really excited to bring the genre to a new VR-focused audience. Our aim is to deliver an accessible and fun game, which provides an intuitive and relaxing experience to not only genre fans, but to those new to city creation too.

Little Cities is instantly recognisable as a city creator, from placing houses and shops, to the freedom you get to creatively use the sandbox as you see fit. It’s an empty canvas that you get to paint your wonderous city onto. 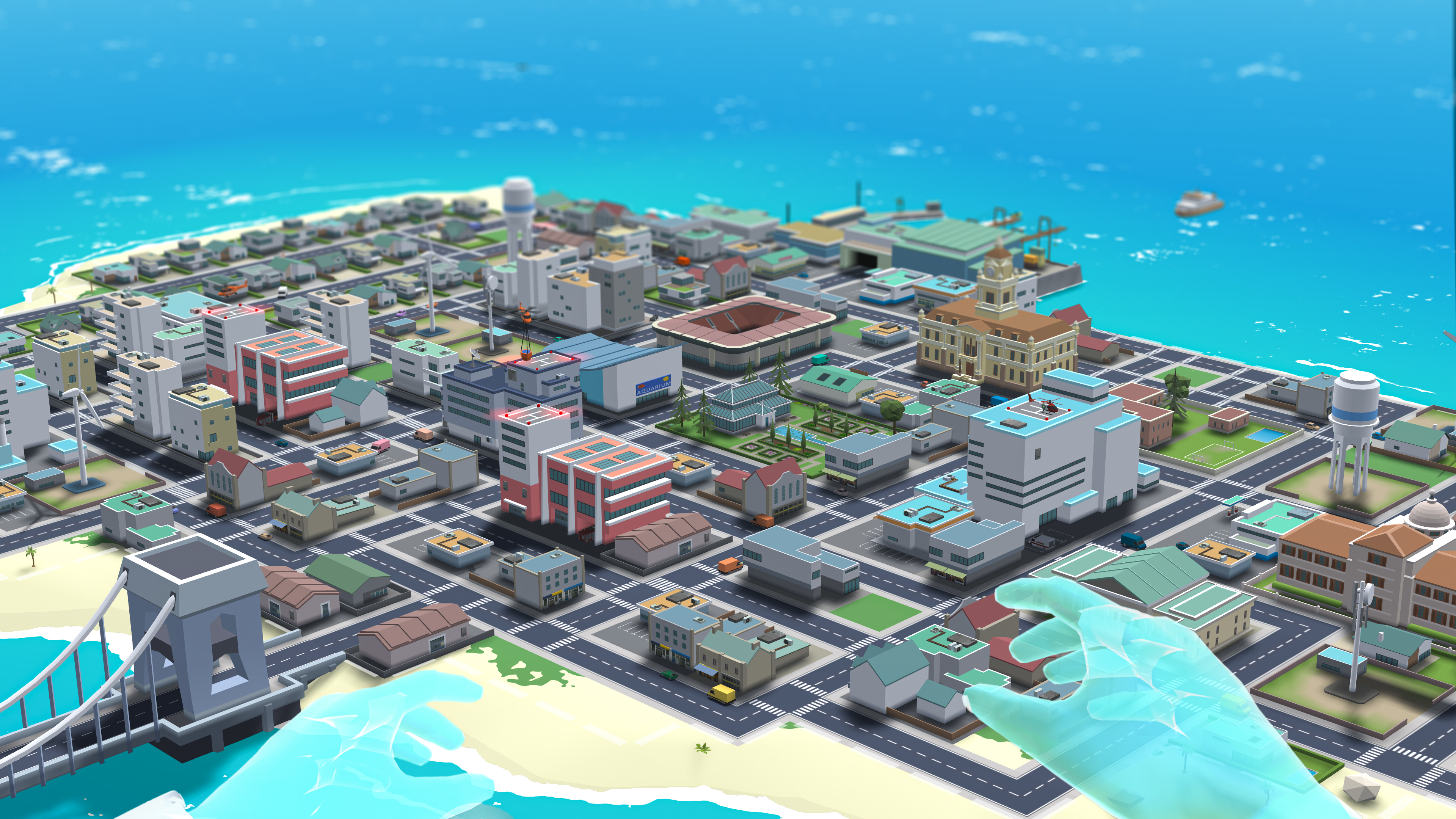 During lockdown, we decided we wanted the game to be reminiscent of a picturesque holiday retreat, something we all desperately wanted, and realised how important it was to provide a sense of well-being on to the player. This cosiness and positivity were an important crinkle in the design of the game, and went on to shape the mood, score, and art style across the project.

Early prototypes of the game stuck more closely to the traditional themes and UI of the genre, but it didn’t translate well to VR. It felt clunky and unrefined. It took a lot of iteration and testing to get the Little Cities experience and interface into an intuitive and fun control scheme that matched the tone we wanted to set. 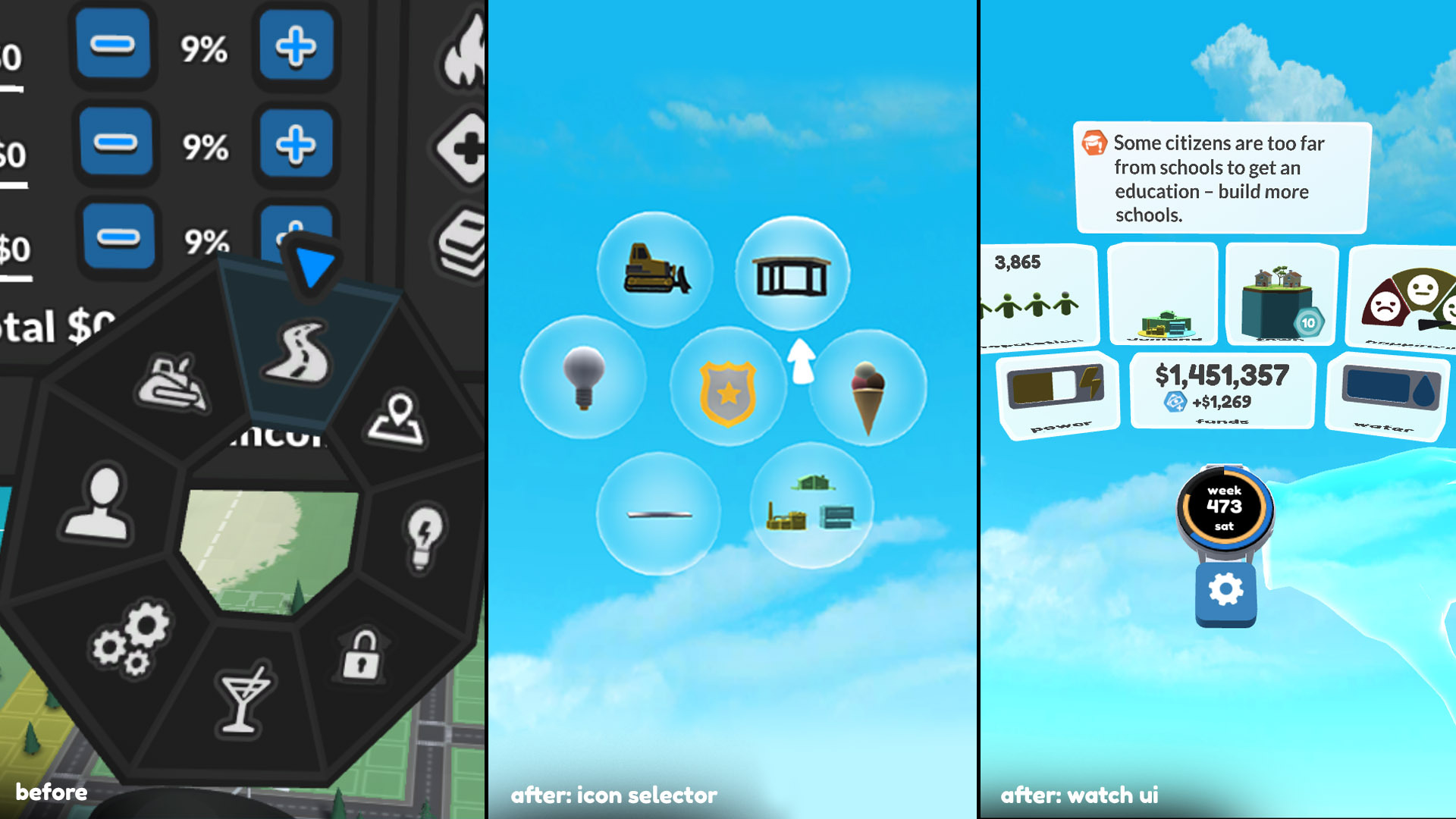 Developing for virtual reality can be challenging. There are some unique obstacles that differ from conventional formats, especially around comfort and user interface. Traditional city creation games provide a lot of contextual information to the player, spread across multiple menus and sub-menus. It can get a little overwhelming at times. We wanted the UI of Little Cities to be straightforward, accessible, and play to the strengths of VR.

The hard part? This genre requires you to juggle lots of stats in order to ensure that your population is properly cared for. The interface we developed, as a result, was heavily influenced by the style of infographics, displaying large amounts of information whilst remaining text-light and visually interesting. 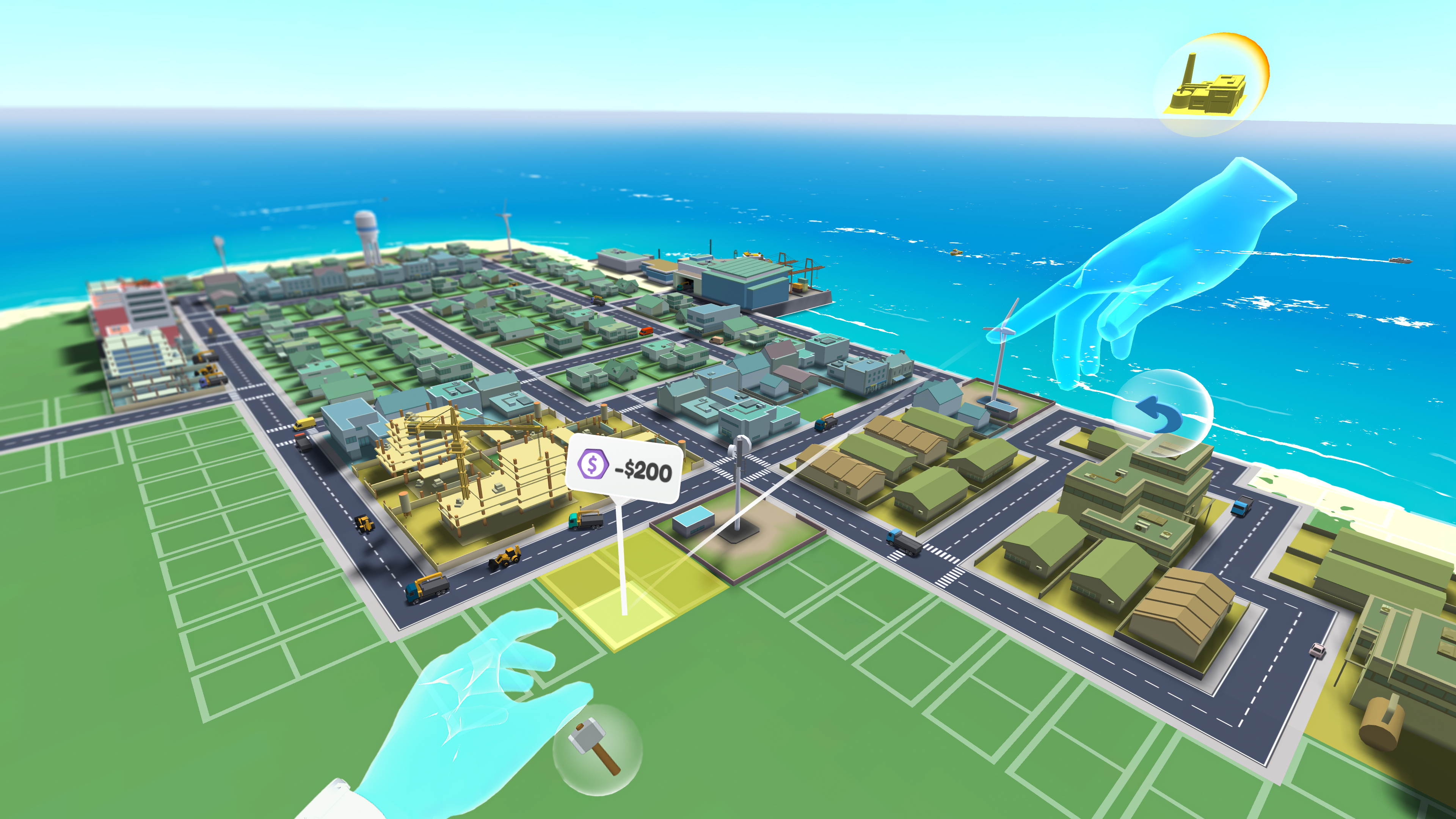 Through the handy wristwatch you’ll have in-game, you will be able to easily keep track of the needs of your little city, from population growth to tips on how to improve your build. This fuss-free approach to the user experience allows us to keep the player’s view free of clutter, enabling you to sit back, relax, and really take in your creation.

Targeting the Quest for this type of game and doing that authentically and in a way that would resonate with players, was our big focus. James was able to build custom lighting and rendering systems which really maximised the available space that players are able to create with. The whole project has been a fantastic learning experience and we can’t wait to share it with players soon. 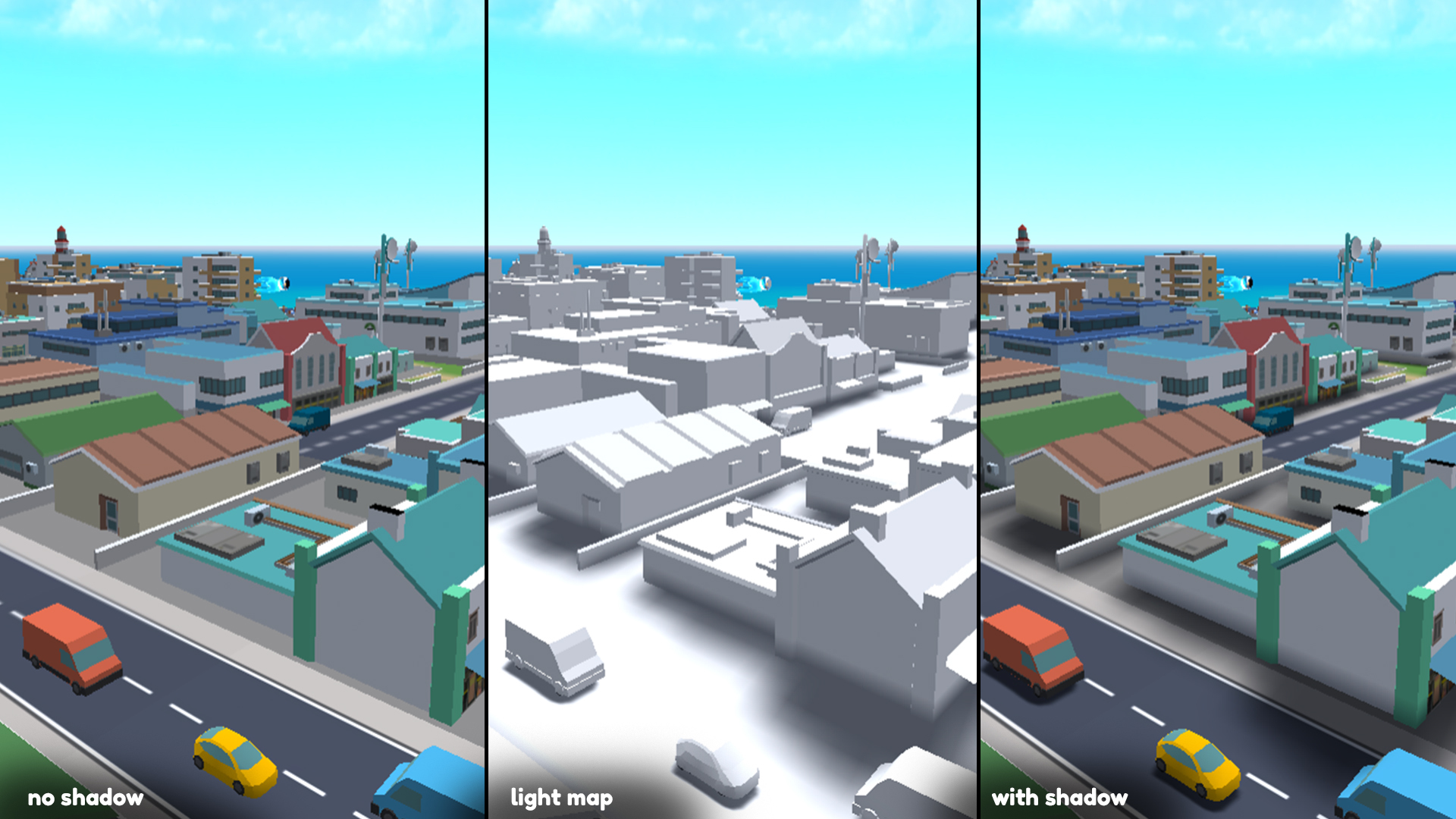 Everyone who plays these types of games plays them their own way. It’s a unique form of expression, whether you place buildings and amenities methodically, or are more inclined to let chaos reign. We can’t wait to see the creations that players come up with when the game launches next Spring!

Little Cities launches on Quest headsets in Spring 2022. You can learn more about the game and watch the announcement trailer right now.